On Friday, May 8th, Hoboken Charter School middle and upper school girls were visited by filmmakers Lauren Parsekian and Molly Thompson who flew in from Los Angeles to share their film Finding Kind.  Through a series of interviews with girls and women around the country, the film explored girl-against-girl “crime” and its negative and lasting impact as well as ways in which young women can be positive agents of change to combat this phenomenon.  Covered by Dr. Phil, CBS News and Variety, the film has received national attention.  It recently was named Best Documentary at the Palm Beach Women’s International Film Festival and was a finalist for the Social Justice Award at the Santa Barbara Film Festival.  We were honored to have the filmmakers select our school for a private viewing followed by a Q&A with and activities led by Parsekian and Thompson. 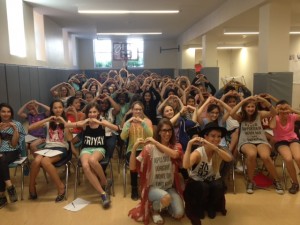